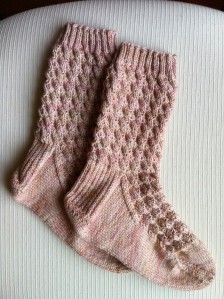 Two socks, completed and happily paired up forever and ever!

The Hideaway socks are finished, and once the testing is finished, the pattern is polished, and some decent “modeling” shots are taken of these cuties, the pattern will be released – should be in the next week for sure! I’m so happy with the way these came out, and I love knowing that they’ve already been through the ringer with other knitters too.

Well, enough of that. Let’s move on already, so much yarn, so little time hahaha. I have a few other yummies lined up next (although, can I take a minute to mention how hard it is to keep up your knitting groove in 95-degree weather? My fingertips sweat just thinking about working with wool. eeeeewww Ok I’m done). Although, no sooner do I say that, but what do I have to show you? An alpaca/merino blend yarn. Right.

Until the weather cools down about 30 degrees, however, my sights are set on this little pretty:

A big hank of Sea Silk from Handmaiden in Canada in my favorite colorway of theirs, “Paris.” (Right, like you couldn’t have guessed that one….) This is an unusually large skein of Sea Silk with approximately 650 yards, rather than 440 yards, because of a mistake in its production. So I’ve been thinking about a lacy rectangular stole worked up on a larger-than-recommended needle to maximize the given yardage. The winding is the easy part – now to swatch and actually pick a stitch. You’ll be seeing a lot more of this one, and I have a feeling it’ll go pretty fast. And if you haven’t seen and/or worked with Sea Silk before, it’s the dreamiest blend of silk and seacell – any finished project has amazing sheen and unparalleled drape. I’m a huge fan, so if you ever see it in a shop, my advice is always to grab it up before it’s gone!

That’s it on the knitting front for today. Lucky me, my dear friend and I have tickets tonight to see “The Bright Stream” by American Ballet Theatre at Lincoln Center. ABT has been getting great reviews for their current season, and I can hardly think of a better way to beat the heat. It also reminds me to keep moving with a little bit of grace, too 🙂

Today, my daughter astonished me by pulling out a top that I knit for her years ago. The Alight Top, designed as an easy tunic/shirt for her summery 2nd birthday (swipe right), is now the perfect rainbow sweater vest for a 5 year old as we head into winter! Just one more reason why creating something with my hands brings me so much joy.