Remember that “Sakura” colorway of merino-cashmere-nylon sock yarn from Fiberphile that I showed you a little while ago? Well, the swatching for the aforementioned sock design has been happening behind the scenes, and as usual, ripping has been involved. I wouldn’t say a lot of ripping, but enough to know that I actually like the design and that just a few more tweaks are needed before I can charge full speed into the sample knitting.

So after the perusal of many stitch dictionaries (both a necessary and time-consuming step in its own right), I found a mildly lacy pattern with a good slanting texture, too. I was looking for a lace pattern for some unexplainable reason – I just thought the luxuriousness of the yarn and the delicacy of the color called for lace. So I swatched on US 3 needles because I knit tightly, but the stitch pattern came out waaay too big and sloppy (and, incidentally, that’s what I get for immediately assuming I should go up a needle size and thinking I know better).

So I switched to US 2 needles and kept the pattern the same – still too sloppy. I was purling the yarnovers from the previous row, and they ended up looking like accidentally dropped stitches, rather than nice even circles. So that had to go, too – time to knit them instead.

That was better, but still…..I had a nagging feeling that it all remained a bit messy. (This is where the Type-A personality can be a blessing and a curse – who knew that the angel and the devil on your shoulders are also knitters?) PS: My mom was intimately involved in hearing and experiencing this story at least once already. Thanks for listening again, Mom!

So what to do? Well, to keep the stitch count the same, the yarnovers had to be replaced by “solid” increases, or stitch increases that create more fabric rather than a hole, like an invisible make 1 increase. This meant that I’d lose the lace effect, but I’d get the neater texture I was looking for. (Interesting….a “make” stitch approach ended up being a good choice….dare I say a “wise” choice….see where I’m going here….?) Since I was working the increases within a reverse stockinette section, the make 1 had to be a make 1 purl. Behold, the decidedly positive change: 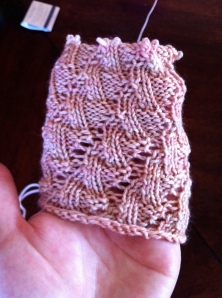 The first three repeats (the bottom three) of the swatch shows the original version with the yarnovers, and the second/”top” three repeats shows the revised version with the purlwise make 1 increases. To me, it made all the difference – now the fabric is uniformly cushy but also visually interesting. The yarnovers just didn’t lend themselves to a crisp-enough fabric for me. Here’s another view, without my hand distorting the fabric – the removal of the yarnovers also tightened up the stitch gauge significantly, although that might not be very visible here: 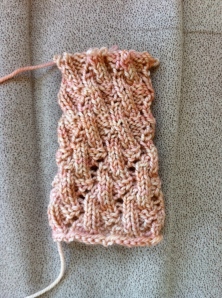 So I love the fabric and now the sample knitting can begin! Our trip to Vegas is this weekend, and I hope to make a lot of progress on the first sock (did I mention I’m knitting them in the round top-down on dpn’s? Well, I just did.)

I know that, to some, handknit socks are either supremely old-fashioned, too fiddly, or decidedly uncool. To them, I say: they are one of life’s great unsung luxuries. Just slip on some handknit socks on a cold day, and it’s a whole new world of comfort.

With that, I’ll stop blathering and leave you instead with a glimpse into what happens when Coco eats white rice – we call it “rice confetti”!

3 thoughts on “a ripping good time”