There once was a beautiful bunch of Victoria rhubarb 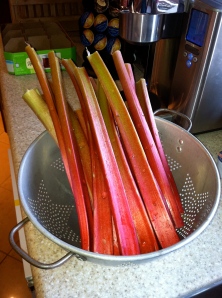 and a stockpile of canning supplies. 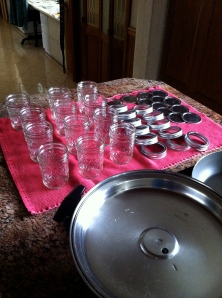 Two-thirds of that rhubarb ended up in a small dice

and then it ended up in a rollicking boil with a whole lot of sugar and a bit of pectin, too.

When the boil faded, the foam remained, but not for long. 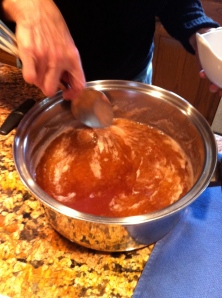 Then the canning supplies came to the rescue, protecting the rhubarb in the depths of a waterbath. In the end, seven gleaming jars emerged, each one sealing itself with a resounding “pop!” And they all lived happily ever after. 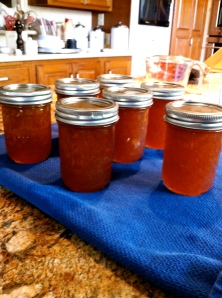 I’d never had rhubarb jam before, but wanted to give it a go because I’m loving rhubarb at the moment, and I was intrigued by the idea of making it into a jam. It’s fantastic! A great combination of smooth sweetness and that traditional rhubarb tang – I tested it several times this weekend, too, so I know it tastes good on lots of things 🙂

But wait! There’s more! What happened to the remaining third of that rhubarb, you ask? Well, it met an equally meritorious end – in my first rhubarb pie.

I got a hands-on class from my mom in making pie crust, and we all agreed that it was a success, especially when it ended up on a plate with some vanilla ice cream.

As you can see, I had a great time in the kitchen with my mom – hope that everyone had a wonderful Mother’s Day weekend! I’ll be finishing up another submission this week, and then it’s on to that sock design I mentioned a couple weeks back; Mom and I even debated the pros and cons of a couple swatch ideas over the weekend, too. It’ll definitely be on the needles by the time I fly to….Las Vegas! My first trip there, and I can’t wait!

2 thoughts on “a rhubarb tale”

I'm not into pumpkin spice lattes, but I do love pumpkins. And the first full day of Autumn, crisp and sunny, seems like the best time to pull out the gorgeous project bag my mom recently sewed for me.