to this finally-off-the-needles and seriously blocking wrap!

I’ll tell you, it was a dead race to the finish with this one. While I enjoyed every minute of knitting with the Sea Silk, I’ve also been itching to get it off the needles in time to block it properly and take it on my vacation so that I can get some good photos of it on my model extraordinaire.

The other evening, after completing the 5 repeats that I thought would use up the majority of the yarn, I weighed my skein and got a bit of a shock (PS: a cheap kitchen scale? Worth its weight is platinum-coated gold for its ability to help me know how much yarn I’m using and how fast.) There was enough yarn for another entire repeat and the final edging! So I turned my needles up to Warp Speed 5 and cranked out what was really the last repeat, then plunged it into a nice cold soak and spent last evening blocking it out.

You may have noticed from the picture above that I had to get….”creative” in my blocking procedure. The blue blob in the corner of the picture? That’s a hand towel folded to the same thickness as my blocking boards, because I needed 10 boards and only had 9. Isn’t that always the way? Then, the wrap was too long for the boards to hold it, unless the board were physically separated a bit to buy a few inches at each interval (have to thank the husband for that idea. Brilliant.) Also, did I mention that this is blocking on my bedroom floor? It is. I needed a big enough space (the kitchen table wouldn’t cut it this time) that Coco wouldn’t be tramping through while she’s home alone during the day, so this was the only spot.

So after 90 minutes of pinning, pulling, pushing, and re-pinning, I was all done. I’ve also finally discovered (although I’ve long suspected this), that:

Can I admit out loud that I really don’t enjoy blocking? I want it to be perfect, but I’m impatient by nature, so this process was a bit torturous. Admittedly, if I had blocking wires and/or more blocking boards, this would have been an infinitely easier process, so that’s something to consider investing in for the future. At least I had the time and space to work on it and an old Jean Simmons movie playing in the background.

These pictures don’t show the true color of the wrap well, so I’m excited to get some real modeled shots to share with you next week. You can see the way the color shifted across the wrap, though, and that was a pleasing surprise – the wrap is almost uniformly washed in the different colors of the colorway. You can also see my trusty little swatch in this picture, that I used for reference in blocking the finished wrap. ALWAYS MAKE A SWATCH! Ok, enough lecturing.

Now that my big wrap is finished, minus the pattern writeup (which by the way, I’m going to add a scarf and larger wrap to, so that the pattern will include 3 sizes…I’ve already had Jane, a great Raveler, work up the scarf version and it’s great! So thrilled), my polygamous nature already has me swatching for those linen projects I mentioned last time. 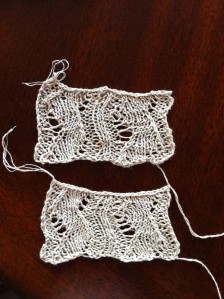 See, what did I tell you about swatching?? These are little samples for that lacy linen tee that I showed you. The top swatch was worked on a US4 and the bottom swatch on a US3. I always knit tight and usually have to go up a needle size, but I’m not sure that the fabric looks right on the US4 – I think it looks crisper and more even on the US3. But I’ll have to measure the stitch/row gauges carefully and go from there. I haven’t done any swatching for the linen market bag, or wound all of the skeins yet for these projects, but there are only so many hours in the day!!

In a couple days, we’ll be off on our mini-vacation to celebrate my father’s birthday and have a family reunion, too. It’s always a fantastic time – an entire weekend of food, pool time, games, fireworks, and general mayhem. For Coco, it’s a chance to run around in grass as far as the eye can see, so we call it her “summer camp.” You can see here that she’s already dreaming about it. 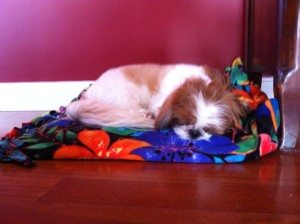 Happy Birthday, Dad! And Happy Independence Day to everyone – do me a favor, and take one minute from your celebrations to thank a past or current military service member for all that they’ve done to make our country an incredible place that actively champions the freedoms of all of its citizens!

Today's the last day to get the Aldwyn Pullover for kids (ages 6 months - 10 years) at 20% off without a code. Just grab the link in profile.