….you’re all excited for grilled chicken for dinner in the middle of the week, only to open the package and be bowled over by seriously stinky already-gone-bad chicken? You improvise, of course! 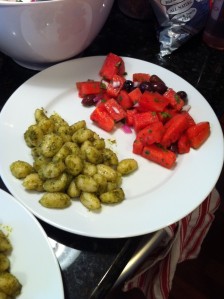 Pictured are two of my favorite summer dishes, unceremoniously thrown side by side on a big plate because I was hungry and rushing! Gnocchi is my favorite “pasta” (so placed in quotes because maybe it’s not pasta if it’s potato?) and when you smother it in pesto, it’s my favoritest favorite. This is a signature dish of the Ligurian region of Italy, where the sun and climate is perfect for growing basil.

Keeping the gnocchi pesto company is an equally big pile of watermelon salad. With the flavors of the watermelon salad being traditionally more identified with Greece than Italy, I guess this plate is my unintentional homage to Mediterranean food. The watermelon is joined by kalamata olives, feta (not pictured – forgot to add it before the photo – told you I was rushing!), minced parsley and mint, red onion, extra-virgin olive oil, and salt and pepper. This salad is actually one of my all-time-favorite dishes, so I made a lot of extra salad to enjoy over the next day or two. It does lose a bit of textural integrity as it sits in the fridge, but that’s made up for by the blending of flavors. Try it if you haven’t and if you love a sweet/salty/herbal blend!

Moving on from the kitchen to the knitting perch, the picture below is definitely a WIP photo – you can’t even tell what it is by looking at it! 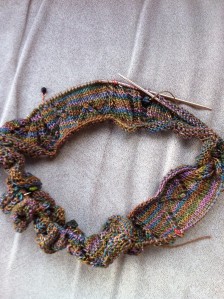 It’s the Handmaiden Sea Silk that I’ve been prattling on about – it’s being knit up into a wrap/stole that is so soft, it’s nearly indecent 🙂 I’m working the stole in long horizontal rows rather than in shorter vertical rows, because (1) I wanted the motif to be oriented vertically while the color changes flow horizontally as you wear the wrap; and (2) I actually just hate a long scarf hanging from my needles as I work – I know, I know – but this does also facilitate easier subway knitting. I need to get my knitting in wherever I can!

I just realized that I never showed you the swatch for this stole! No wonder you’re thinking “yeah, that’s great and all, but what’s it actually going to look like??” Here’s a photo of the sort-of-blocked swatch that I made last week before I cast on for the sample: 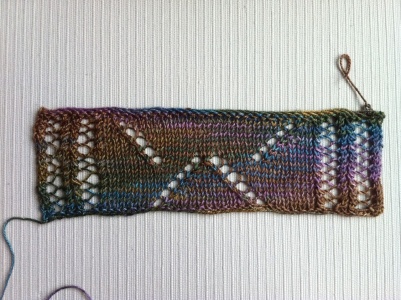 What’s neat about this design is that while I’m knitting a stole horizontally, I have a tester from Ravelry working vertically on a traditional scarf version that will just have this one motif. She’ll be using a solid rich wine-y color of Sea Silk, so I know it’s going to be stunning – can’t wait to share the finished photos! Until then, I’m just enjoying working on this soft/smooth/sleek yarn and watching the colorway develop in thin lines across the motif. Very cool.

Apart from knitting, knitting, knitting, I’ve been trying to take in the excitement of NYC in the summer – I got another ticket to American Ballet Theatre’s production of Coppelia last night, unexpectedly! The performance was especially noteworthy because it featured Ivan Vasiliev in the lead male role, and he’s a Russian superstar in the ballet world – I’ve never seen anyone jump like that!! It was a great performance, and just the right light entertainment for a perfectly warm summer evening. In between acts, I was able to enjoy the night air from the theater’s balcony and snap this photo of the famous fountain shimmering in the middle of Lincoln Center. With the theater facades glowing and the high-rise buildings twinkling in the background, it doesn’t get much more “New York” than this: 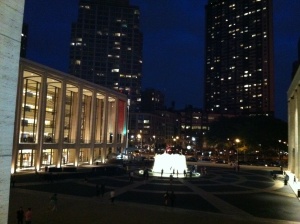 Enjoy the weekend, everyone, and celebrate your fathers! Happy Father’s Day, Dad – you’re the best, love you!