The week is almost over?!? How does this keep happening so quickly? At least we’ve got a great weekend to look forward to, with the Memorial Day holiday and promises of sunny weather in the NYC area for once. Coco, for her part, is keeping a keen eye out for the unofficial start of summer: 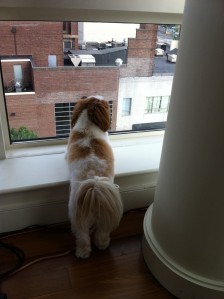 I’m also preparing for a relaxing weekend at the beach – or at least, near the beach. For starters, I’ve picked up several crafty magazines to pore over in the sunshine (Martha Stewart Living, the latest issue of Cast On from The Knitting Guild of America, and the two latest issues of Marie Claire Idees, the French magazine that is like Martha Stewart Living on crack – fashion, food, and TONS of crafting in each issue – gotta keep my French skills up, after all!) and I’ve also started the second sock:

This project obviously travels well, so it’ll be in my purse to work on whenever I get a quiet moment. I decided to call this design the “Hideaway Socks” – you know, the socks you want to wear when you’re in your favorite hideaway, whether that’s in your favorite armchair with a good book, in your kitchen lazily baking on a Sunday, lying in bed having a late breakfast, or spending the holiday weekend at a vacation spot far from the city lights. I’ve already got two great testers who are testing the larger two sizes, but I actually still need testers for the two smaller sizes, if anyone out there is interested! wink wink

Speaking of good books, I’ve recently finished a couple of books that incidentally were centered around the same subject in their plots: World War I. I didn’t plan to read two books at the same time that were both about WWI, but I do love period novels and I love books about England, so the subject is bound to come up, I think. The first one is The Children’s Book by A. S. Byatt.

This book took me 6 months to finish (mostly because the majority of my book-reading time is taking up by knitting. You know how that goes, right?). This novel is nearly 900 pages and covers the movements of several artistic families during England’s Edwardian era in head-spinning depth, so I’m afraid that a large part of the historical details went over my head. But the way that the novel uses WWI is thrilling and disturbing at the same time, so I agree with the reviewer that described the novel as a tragic fairy tale. If you’re looking for a sweeping epic over decades of sociopolitical change, or if you’re just looking for a totally engrossing read this summer, check this one out.
The other book that I finished recently is Maisie Dobbs by Jacqueline Winspear. 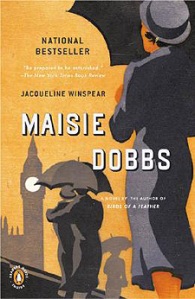 I chose this book because I have a soft spot for female English “detectives” written in a period style (cough Jane Marple cough). This book is the first in a series about a young English woman, Maisie Dobbs, who was a nurse in WWI and who turns into a psychologist/investigator in the period following WWI. This is a quick read and I’ve already reserved the next two books in the series from the Queens Library, so I’ll be prepared with lots of great reading in June (PS: the Queens Library system has been on the budget chopping block for a long time now with the result being that new books can’t be purchased and both hours/jobs are being slashed. Check out the website to learn how you can sign the petition to save these great libraries and promote learning for all of Queens’ residents.)

That’s all the news that’s fit to print chez Chalson, so have a great long weekend and remember to honor our veterans on Monday!

I'm not into pumpkin spice lattes, but I do love pumpkins. And the first full day of Autumn, crisp and sunny, seems like the best time to pull out the gorgeous project bag my mom recently sewed for me.